Summer is coming, and as much as I like to Get The Fuck Out of Texas once is starts over over 100 degress, I’m sure I’ll be here for at least a portion of it. I’m intending to add a layer of radiant barrier on the roof, which will help, but only so much when it’s 90 degrees at 10 PM with 45% humidity. I’m not as much as an AC hater as many simple living advocates, but I still don’t get excited about it. However, after extensive searching, I managed to score this monster on Craigslist for a cool $200, which is exactly 50% of its retail price, nearly new, still with stickers and shrink-wrap intact. 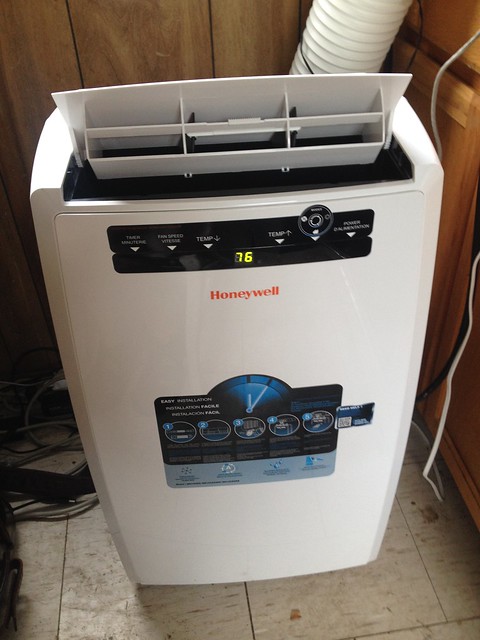 I installed it into the trailer kitchen, which is similar square footage-wise to the yurt. It started at 87 degrees, and over the course of the next four hours, managed to bring it down to around 75. The trailer is very drafty and the yurt may actually be better insulated when I finally close the last few holes I haven’t solved yet.

It’s ridiculously huge, noisier than I was hoping despite its 4-star, 1000+ reviews on Amazon, and much more cooling capacity than I will need (it can do 350 sq. ft., the yurt is only 113), but I needed an AC unit and it was too good a deal for such a great machine to pass up. If it turns out not to work in the yurt due to space constraints, I can easily resell it for what I paid for it and buy a small unit if I find one that’s quieter. I may also be able to baffle it somehow to make it a little quieter, and at night the noise will actually help drown out the ambient Mexican music, gunshots, and howling of coyotes that so frequently ring down from Cadillac Hill when I’m trying to sleep. Lee thinks it’s quieter than the average window unit, and he may be right.