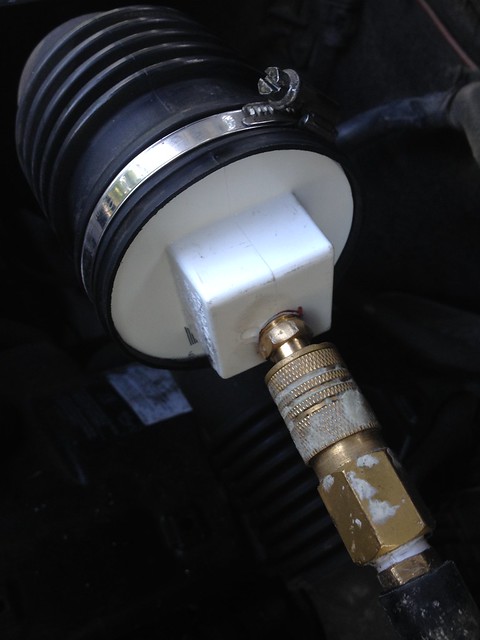 Junior, my 2007 Dodge Sprinter, has been disabling his own turbo recently because he’s been detecting unusually low pressure there. He’s that smart! Why? Because he’s actually German.

This is annoying, because he drives like a pig without the turbo. Surprisingly, it doesn’t seem to affect my fuel efficiency much, my Feely average being 18.2 mpg.

This is generally caused by a leak somewhere in the system. There are many hoses and doodads involved. (Those being the air filter, the turbo, the resonator, the intercooler, and all the hoses that hold them together.)

I’m currently corresponding with People Who Claim to Know Things on The Sprinter Source Forums and watching random repair guys on Youtube. The General Consensus is simpler than you might think. Pump the system full of compressed air, listen for whistling noises, and spray lots of soapy water on stuff to see if it bubbles.

To that end, I constructed this effete device out of $6 of parts from Home Depot. It jams gracelessly into the place where the air is normally sucked into the system and allows me to connect my shop air compressor to it. I verified that at least my testing setup is mostly functional and correct today. The jury is still out on whether or not there are other hoses that need to be plugged to properly isolate the turbo assembly. My vote is “yes”, and the fact that those hoses are still open might explain why oil comes orgasming out of the dipstick riser when I replace the oil cap under pressure.

We’ll note that all sources agree that putting the cap back on under pressure is *not* a good idea.

In other vehicle news, the Late Lamented Metro may get a new lease on life, because Austin Community College does car repairs for the cost of parts and a $40 shop fee. Although I’m still planning on parting with the ridiculous little clown car, I’d get a lot more for it if it had a new head gasket and could actually be *driven* places. I’ll be signing up for next semester to see what they can do for me.