Trunking Up the Honda 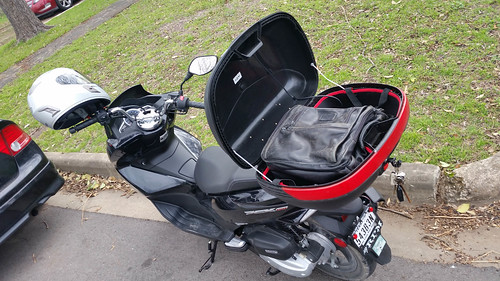 Got my luggage trunk installed on my Honda PCX-150, drastically increasing my cargo capacity. It’s big enough to hold a full-sized satchel and combined with the space under the seat and a backpack, I can carry at least three or four full grocery bags worth of stuff at 90 MPG. I’ve also got some black nylon panniers that get me as least another bag for big cargo runs.

This trunk probably saved my life in the wreck that totaled my Vino 125, because the car that hit me from behind slid under the trunk first *before* slamming into me, giving me a split-second to jujutsu-roll off the bike before the big impact came. Amazingly, like me, it survived mostly unharmed! My Mom bought me this PCX-150 as a replacement when I took care of her for several months after she broke her arm.

It’s a good thing I’m prescient and knew my next bike would be black. 🙂 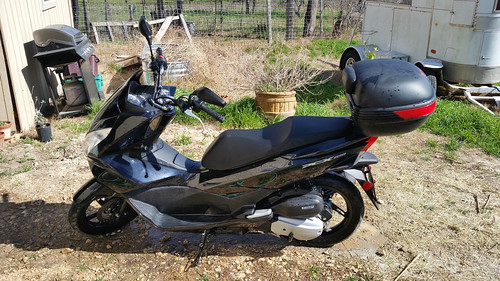 One goal I set when I moved to the farm was to use *less* fuel even though I was living about 15 miles out of town. I made this commitment at the same time that my 40 mpg Metro died and I bought my 19 mpg Dodge Sprinter, Junior. The only way this is possible is by making fewer trips, using the scooter way more than the van and bicycling on my Brompton folding bike as often as possible. So far I’ve made progress on the “fewer trips” thing. I frequently go for a few days without going into town. By installing this trunk on the scooter, I’ll be able to use it for more trips instead of the van. But the *real* killer app in all this will be getting far enough in my urban stealth camper conversion of Junior to where I can drive into town and stay for several days instead of having to come back, and now that the yurt is really livable, that’s my next Big Project. I already have most of the major components, including the solar panels, charger, batteries, inverters, fuses, and useful knowledge from the yurt about how to do the sink, toilet, etc. I’ll be posting more about that project here soon!

Speaking of the Metro, I’ll finally be surrendering it the junkyard this month. It’s very painful, we’ve been through a lot together, but my fix-it energy is better spent on Junior, the yurt, and my gaming career. I’ll be doing a memorial post for the Metro near the end.