One important question when running an RV from batteries is “how much power do I have left?” For this I use an RV power monitor. Another is “how can I run my 120V household stuff in my van?” The answer to this is a device called an inverter, which converts 12 VDC to 120VAC. I’ll cover those below. 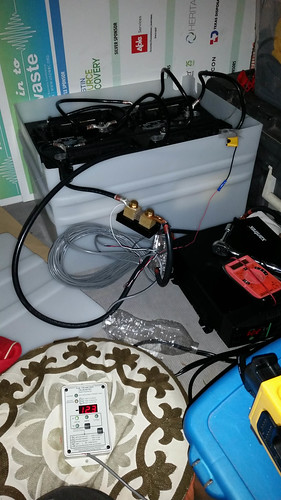 The Bogart Engineering TriMetric TM2030RV meter answers the first question a lot more accurately than simply looking at the voltage. It actually measures every amp that flows into and out of the batteries then tells you “you have 75% capacity left.” It’s the shockingly ugly and outdated-looking beige box with the red display violating my zafu with its presence.

It has a big resistor called a shunt that you hook up to the negative terminal of your battery pack. That’s the copper colored thing hanging unsafely from the side of the battery box. The shunt has a *very* small but also very precise resistance. By measuring the voltage change from one side to another, the meter can tell exactly how much power is flowing, and in which direction. It will also remind you to overcharge your batteries on a schedule, etc.

The first thing I’m doing with it is measuring the power profile of all my appliances, like my monitor, coffer maker, water heater, etc., when they are running through my inverter.

My inverter is a Xantrex ProWatt 2000. I recently took it completely apart thinking it was broken when, instead, I just hadn’t held the power button on long enough! I did this because I’m sometimes a complete idiot. The Xantrex is the large black box on the right with the orange meter sitting on top of it.

It can run 1800 watts of 120V appliances all day long, and can handle short bursts up to 3000 watts. It is a true sine wave inverter, which means it behaves the same way that wall power does and works will any device. Modified sine wave inverters are cheaper, but don’t work with everything. As it happens, I also have a Xantrex 1000 watt modified inverter from a previous project I’ll probably carry as a backup.

How much can I run? Well, an old-skool 30-watt bulb uses 30 watts. My tea water heater pulls about 900 watts when it’s heating, nearly half my capacity! But after it’s done it only pulls about 5 watts to keep the water hot. Effectively I can probably run one larger load and a few smaller ones, or two larger loads briefly. Running something through an inverter is much less efficient than running it directly from 12V DC, so it’s best to get appliances that are set up that way, like Norcold 12V DC fridges. The inverter itself uses a small amount of power when turned on even if nothing is plugged into it, so it’s best to turn it off when not in use.

So between those two things I know 1) How much power do I have left, and where is it going and 2) how do I plug in my 120V appliances?

Next I’ll cover my vast array of charging devices, including solar, alternator, and 120V.