Repairs and Van Slumming in Portland

After two years and countless days of work in 100+ o heat, I finally made it back to Portland!!! It’s been my goal to visit every summer since I started in 2012, and I’ve only made it four times. It takes me less effort to go to Burning Man three times than to Portland once! 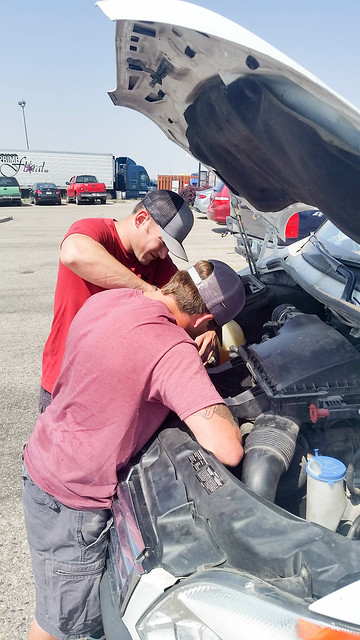 Just before leaving Idaho, I ran into these guys digging around under the hood of their Sprinter, the same vintage as mine. It turns out I had just done work relevant to their problem, and was able to use my tools and knowledge to help them limp into town to the Mercedes dealership. It felt good to pay back some of the Remote Location Repair Assistance Karma I’ve been receiving so much of recently. There’s something about cross-country travel that brings out the best in people. 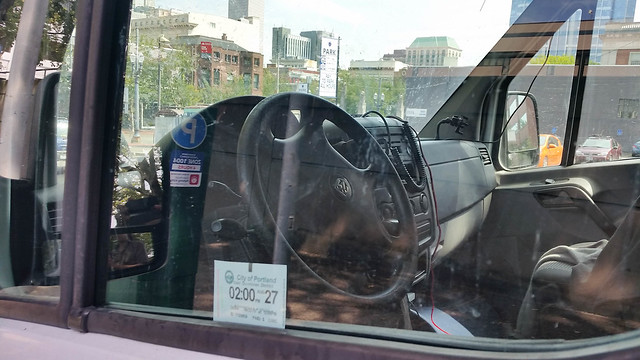 I started things right with a Forest Park hike with Rita and Scott. It was amazing to see them again in person before too long, and we once again established we have a huge amount in common. We were discussing photography, van living, and Rasberry Pi embedded van networking projects within five minutes of our initial hugs. 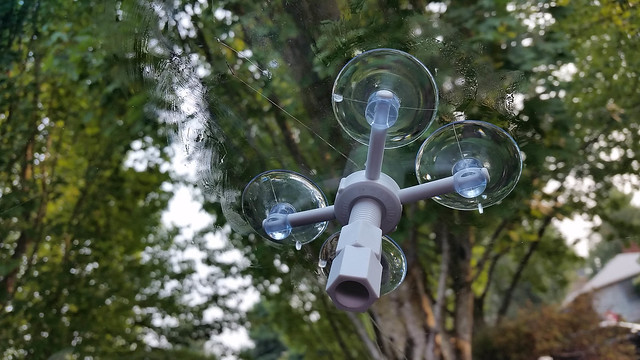 Junior had a widening crack in the front windshield that needed attention. Windshields are actually two layers of glass with goo in between, and it turns out this crack was on the *inside*. Why is that important? Because the crack repair resin hardens by *exposure to the UV light of the Sun*. Windshields filter out 96% of UV rays. I figured this out just as the sun was going down. The resin was trying to drip out, and I couldn’t get it to set! 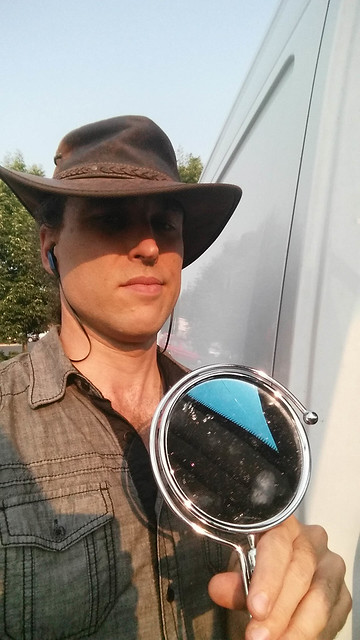 First I tried to use a reticulated makeup mirror to reflect sun onto the location. It was already near dusk, and even with the convex mirror, it wasn’t enough. I left the plastic covers in place and put the request on FB for a UV light. 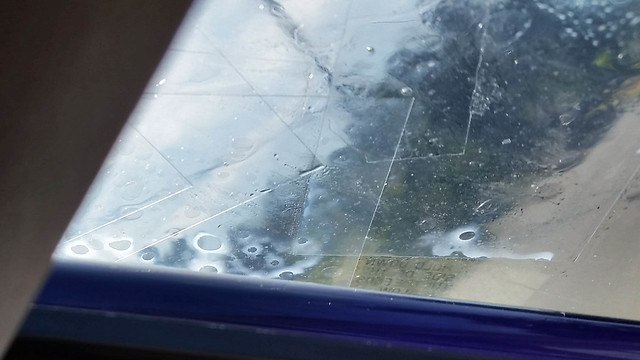 In the meantime, I had lunch with the indubitable Amanda Thomas, who’s front yard was the home of my yurt on many previous visits. It was amazing to see her after so long. She gave me a tour of the still-in-progress new house she bought. Here’s Junior visible out her nifty new front door! 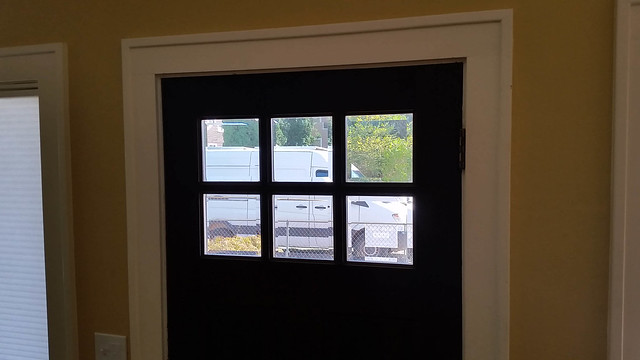 After lunch she let me borrow a 15 watt UV light, which I promptly strapped to the windshield with duct tape and bungie cords: 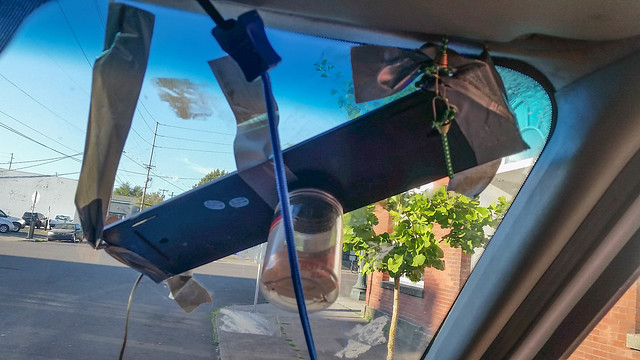 I left in place for several hours, then repeated it again the next day. I didn’t know if the UV was powerful enough to get the resin to set, but it *seemed* to be working.

It says something about Portland that there were precisely zero questions about the UV light strapped to the inside of the windshield while parked downtown, even when I waited to long to take it down and it was visible at night! 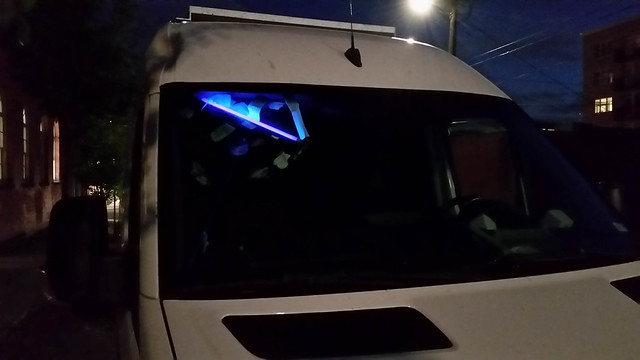 However, it seems to have worked! The repair is far from perfect, but my main goal was to stop it from getting worse, reduce the glare, and make sure I was still waterproof. If I have to, now that I get the process, I can go back and patch it up. Steven has offered to let me borrow his UV laser, which would cure things *much* faster next time! Hopefully I’ll spill less resin, I couldn’t find the razor blade it came with, so it took about 45 minutes of dedicated scrubbing with acetone to get off all the excess resin and duct tape glue! Blech. 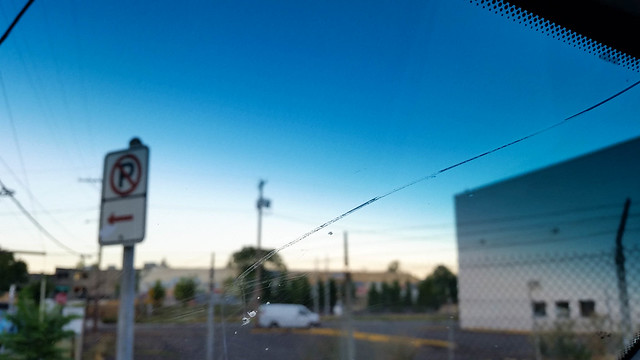 Within days of arrival, I had hit several of my Portland Faves, starting with The Tao of Tea on Belmont, the Most Zen Place On Earth! 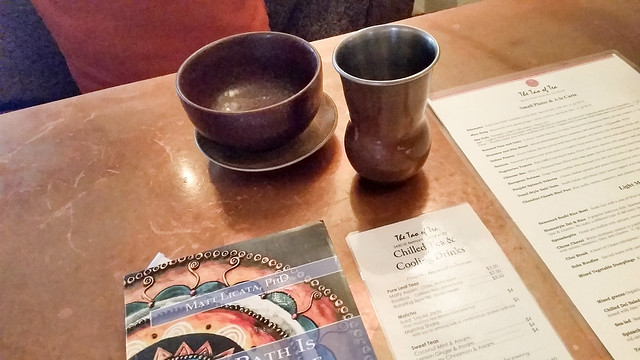 There I sipped tea and continued The Path is Everywhere, one of the best personal psychology books I’ve ever read. It was gifted to me by my jujutsu instructor, and integrates at least six different fields/modalities I’ve already worked with, including Buddhism, attachment theory, internal family therapy, and Jungian psychology. By combining these with extensive client experience, the benefits are greatly amplified. It consists largely of identifying parts of ourselves we were forced to disown as children in order to get our needs met, and using our power as adults to re-integrate them back into our lives so they stop pulling strings behind the scenes. Thanks John!

One of the most important components of the my van life setup is my Brompton folding bike. When stowed it fits neatly behind the passenger seat, but when deployed is a mean 6-speed urban commuter bike perfect for Portland’s proudly bike-friendly streets. The folding mechanism is powered by one’s dignity, which must be channeled into the bike during movement. Most of it is returned upon dismount. It has a headlight that’s brighter than most cars, and an integrated USB phone charger! The bike uses 100 PSI for the tires, and was another great opportunity to use my new Ryobi 18V inflator. 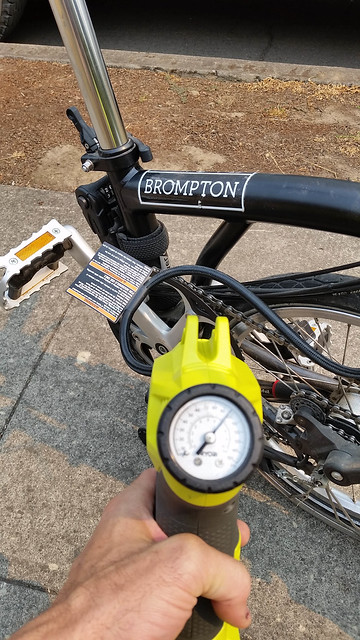 With the Brompton, I can park in a neighborhood in a nice central location, then ride to wherever I need to go. My only concern is that it’s a prime target for bike thieves, a perfect example of how having things other’s don’t leads to problems. I’d like to live in a world where anyone who wanted one could have one and there was no motivation to steal.

One of my first trip was to get a glass drillbit to help with the windshield repair. One glance at my poseur snowboarding helmet shows you how deftly I solve the Brompton’s dignity problem.

I’m am nothing if not fly. 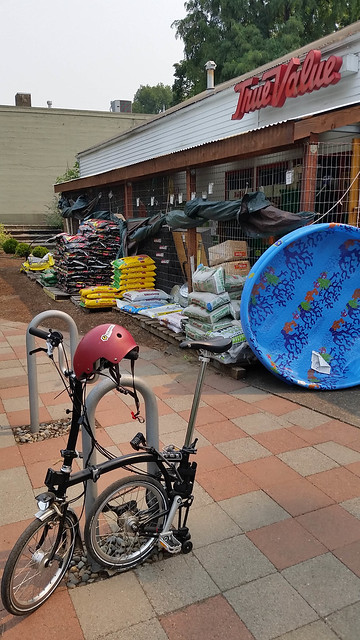