Storage in Junior, while plentiful, has been pretty chaotic so far. The bungie cargo nets above the bed have been Xtra Krazy. 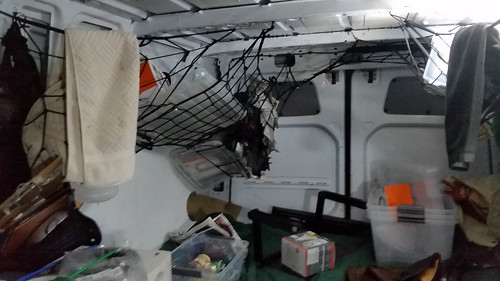 They’re actually a fabulous idea, and I consider them Necessary Minimal Gear for small living. However, they’re also ugly, chaotic, and wear out. I wanted something that was still mostly open, but neater.

There’s more crap than storage, which means I have to move shit every time I want to drive or lie down. I have to walk carefully not to trip, which is terrible Fung Shui.

Transparent tubs are great, and I’m going for a Teahouse in the Forest theme for the van, so I decided to try a Shibari harness.

I claimed some space in the largely unused ADX jewelry room. First I tried some rough natural rope, because the shagginess fits the theme. However, it’s weak, hard to work with, and shits fibers all over my bed. However, I seemed to be onto something… 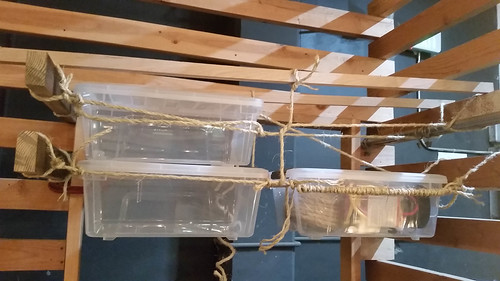 There were definitely some problems with center sag, especially on longer runs, once inside Junior. 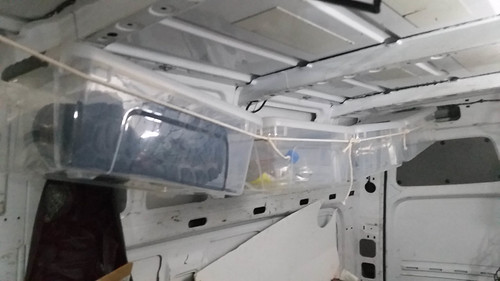 I proceeded to the Orchard Supply, a huge warehouse landscaping store, looking for bamboo. While they didn’t have any the right size, the green steel tubes covered with plastic are actually a pretty good stand-in, especially if they were painted to look like bamboo. 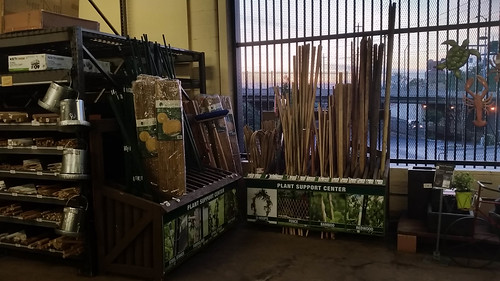 They’re light, strong, and straight like bamboo, but more uniform.

The design is quite simple, and anyone could make it. The tubs stay put pretty well so far, I’ve only had one fall-out. The front and back rope for each tub slides toward the tub to tighten, and away to release. I think there’s an even better design where gravity will tend to hug the tubs, keeping them in place, in the manner of a slipknot.

What I would really love was a way to accomplish all this with one continuous rope that I never had to cut, without wasting a lot of rope doubling back, but I’m not that good yet.

Now that this has worked on one side, I’m going to add another four tubs on the other side, and may look at making them two-deep in some places. I could also put them short-side-on instead of long-side-on. Getting the smaller tubs into this kind of storage will allow me to use the space under the bed exclusively for the heavier, largely tubs that more frequently contain Ugly Shit like tools.

It seems like now might be a great time to research knots and storage techniques in the holds of sailing ships!

2 Responses to Shibari Storage at ADX