I got the van pipe fixed and back on today!

Here’s the damaged newer pipe still on the van. You can see clearly where the sooty diesel exhaust is leaking along a crack between the pipe and the flange. 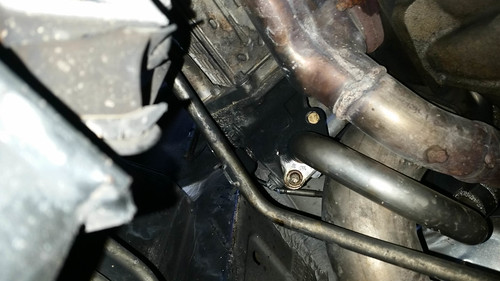 With what I thought was one repaired pipe ready, I was finally willing to take the other damaged pipe off. This is a Big Job, and I didn’t want to have an undriveable van for days. It was *much* easier to take off with my boroscope camera, as I could point it at the hard-to-see-and-reach bolts behind the engine right at the firewall. 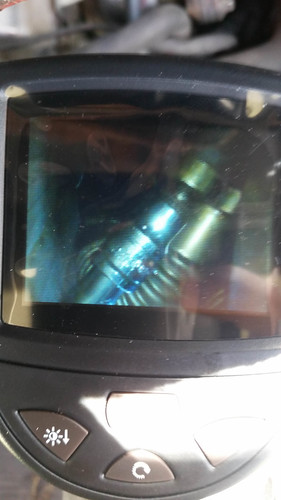 It’s still a massive pain in the ass, but I got it done and the pipe was out.

Then I had to decide, do I fix the newer pipe, or install the one I had fixed with super shoddy workmanship? It turned out the stainless steel collar I made on the backup pipe was only really held on by flux, not bronze or steel. I peeled it off and decide to try repairing the big hole with bronze, simply dabbing on new metal until it was covered. In the process, I managed to cut the whole pipe in half. 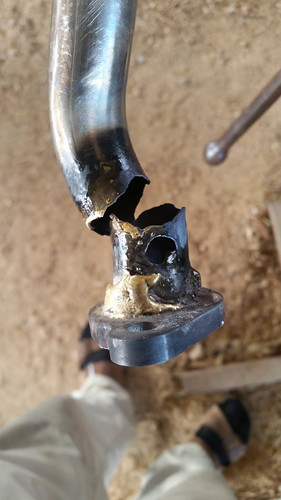 Unfortunately, the *new* pipe was much more badly damaged than I thought it would be. It was barely hanging together by a thread! That crack you see below goes *all* the way around the pipe. That little bit in the middle is the only part that’s still together! 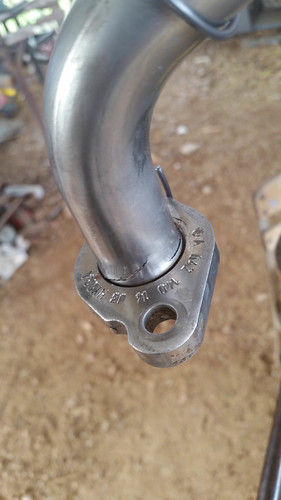 The Good News was that this is exactly the kind of fix that the SSF-6 is really good for, and I still had most of a $30 stick of that left. All the problems in hurting the old pipe came because the oxyacetylene torch can easily melt steel, especially thin steel pipe. Instead, I used my propane plumbing torch, which is much cooler. It would be very hard to accidentally cut steel, but it’s still hot enough for the 1150 o F SSF-6.

I basically made a new collar starting up higher on the pipe than the rip, and dribble the SSF-6 down the side to make a new join. It worked beautifully, there was no risk of blowing up the pipe, and everything looked clean and sealed when I was done. 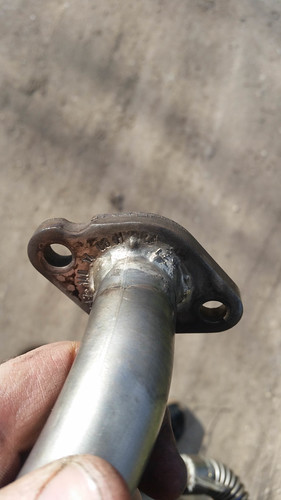 I pressure tested it to 24 PSI with my blocking plates and saw no leaks. There was also no light visible looking into the tube in sunlight, which is how I found several of the leaks in the previous repair.

I re-installed the pipe over the course of several hours, another huge job. I fired up the van and tried feeling for leaks with my hands and couldn’t find any. Success!

There are two problems. One is that I may have further stripped the damaged hole on the lower pipe connection to the EGR cooler. I had blamed myself for stripping it, but the more I think about it, the more convinced I am that it was originally stripped. I think the pipes are breaking like they are because that side isn’t held on as tightly as the other, so as it expands and contracts, it twists the end of the pipe right along where the breaks have happened in both pipes. This would explain the repeated failure, and it will probably happen again until I fix that hole. Doing that would require pulling the pipe *off* again, however, and I’m 100% unwilling to do it now. Next time it fails, I will, but I have a whole other hair-brained solution to this problem that will make the EGR cooler obsolete, and it involves the pipe I destroyed earlier. More on that later!