The Return of the Funky Robot Chicken

After many years in the wilderness, my funky electronic horn experience has returned! 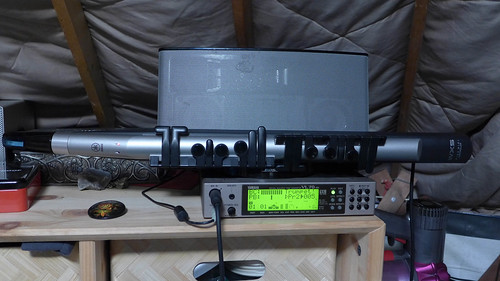 What’s that, you ask? It’s basically an electronic wind instrument that’s played like a saxophone and can sound like anything! It has hundreds of voices, and contains *no* prerecorded sound. The tones are generated entirely using acoustic math based on a physical model of the instrument. Here’s an example of what it can do:

As fans of my Oboe Hero t-shirt know, I played oboe in junior high. This is like having a magical oboe that can sound like anything from a saxophone to trumpet to heavy metal distortion guitar! It comes with hundreds of instruments, and new ones can be created from scratch. You can say “it’s made of brass, has three reeds, and squeaks badly when you overblow.”

Both units have been discontinued by Yamaha, so they’re worth a *lot* of money, but they can also both be repaired if something breaks. I already had the horn apart when it wasn’t working and was able to restore it. Its guts aren’t actually that complicated. Part of me feels like I might be investing in a dead end, but the truth is that these skills are directly transferable to a real instrument, and if I *really* want to buy a replacement, I can. Mainly I’m super happy to be in the horn game again be able to just pick up the instrument and play!

Eventually I’d like to combine this with Kid Beyond-style Ableton loop beatboxing. I was a little misleading when I said that the oboe was the instrument I have the most practice with. I was in choir for *six* years, had professional vocal training, regularly participated in contests, and was even briefly in a singing and dancing group in high school. If I could get those two things working together, the possibilities are endless!