Staying Cool in The Heatwave 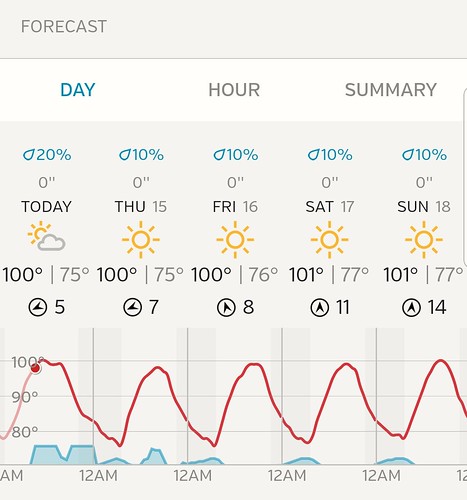 It’s hotter in the yurt than I want right now. High 80s during the day. Fridge temp in the high 40s, and the freezer at 8 o F. Our daytime temps are over 100 o F, and the heat index is in the upper 100s. Worse yet, night time temps are only getting down into the upper 70s with close to 90% humidity overnight. This means that all forms of cooling are less efficient *and* that mold allergies are going crazy as it grows out each night and is then cooked into spore-generating panic during the heat of the day.

I recently removed most of the comforter insulation in the yurt to keep things cleaner. I made a foam gasket to help seal the join between the roof and the walls and improved the seal around the AC ducts. I also re-built the front door which was profoundly warped and allowing a lot of airflow. After I did that, I was able to keep the yurt at a maximum of about 82 o F on days it was getting into the upper 90s. However, since our latest heatwave hit, where it’s going into the 100s ever day and the heat index is in the upper 100s, the yurt temp has been slipping into the upper 80s, which is uncomfortable and unacceptable. I’ve also burned through a few extension cords in line with the AC unit because they were probably 16 or 14 gauge, which isn’t big enough to carry that much power. I rebuild that part of the electrical system using 12 gauge Romex used for house wiring, and now the wires only get mildly warm.

Right now I’ve got Reflectix radiant-barrier bubble-wrap under the billboard vinyl roof. The walls are just the vinyl. Previously all that was also covered with fabric insulation which both improved the air seal and helped keep the heat out. However, it was too hard to keep it clean, especially on the walls where it was really hard to remove. The AC unit I have is supposed to be good for up to 350 sq. ft. The yurt is only 113 sq. ft.

Those fridge temps are supposed to be about 38 o F and 0 o F respectively. I know it doesn’t get enough airflow over the coils, because moisture builds up in the drip tray and then starts to stink. I measured the temp on the surface of compressor, and it’s 118 of F. I’m gonna try putting a fan on the compressor to see if it will improve the internal temperatures. However, I bet that’s going to raise the average temperature in the yurt. One thing I’ve considered is making a vent tunnel just for the fridge where it pulls cooler air from under the yurt, circulates it across the compressor, and then pumps it back out again. If the outside air is at 100 o F in the shade, though, I’m not sure how much that would help. Adding the fan to the compressor is the first thing to try. If that lowers the internal temperature down to where it’s supposed to be, then maybe I can try the vent experiment.

This entry was posted in Uncategorized and tagged AC, Austin, heat wave, yurt. Bookmark the permalink.