The New Drawing Is Here 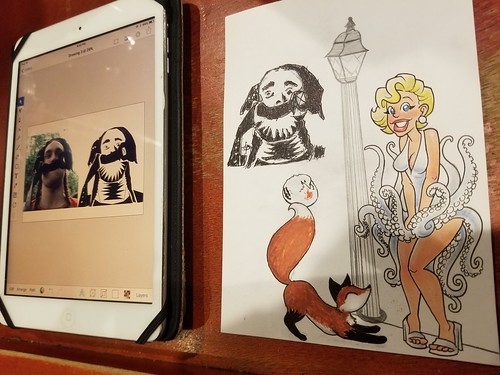 Here I did it on a deadline to contribute to the ComeDrawATX group draw. Other times I take longer to try to get more photo-realistic with gradients, etc. Using deadlines is better, though, because otherwise I tend to obsess and get stuck and frustrated. For now I want to emphasize getting through the entire process rather than the quality of the finished work. That will only come with lots more practice.

I’m using this pipeline in order to improve my hand and digital vector illustration chops. My goal is to have the ability to do this on Android, iOS, Windows, and OS X. I’m restricting myself to common feature of most or all apps. Those are basic curves and shapes, colors and gradients, and simple intersection geometry. I’m avoiding custom features that tie me to one app, at least until I get better at my basic skills.

Right now I’m using Ivy Draw and Infinite Design on Android, Inkpad on iOS, Clip Studio Paint and Affinity Designer on Windows, and Inkscape on OS X. Most of my work so far has been in Ivy Draw and Inkpad.

This time I used Inkpad on my elderly iPad Mini, which is stuck on iOS 9 and can no longer be upgraded. Once I get my resale pipeline moving again, I plan on getting a more modern tablet, probably a newer Mini, to replace it. I’m open to other suggestions, but it looks like the iPad still has the best balance of price and ability.

There’s a fundamental conflict here between the digital vector and hand-drawn steps that is deliberate. I’m trying to get *away*, at least at the moment, from anything digital involving sketching or painting. It’s 100% mechanical assembly, and I want every stroke, shape, and gradient to be fully vectorized and editable. Nothing pixelized or permanent anywhere. Then, obviously, when I do the physical rendering, I’m bringing all the sketchier hand-drawn skills in. This process trains photography, composition, vector design, and hand drawing all at once, and once I master it, will allow me to make high quality illustrations anywhere I go with minimal gear.

In the meantime, there is a *great* deal of swearing.

This entry was posted in Uncategorized. Bookmark the permalink.