Back in the Tiny Saddle Squared. 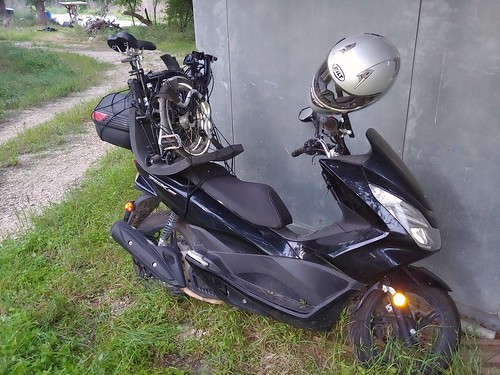 I dug my folding bicycle out of storage, *finally* fixed the headlight on the 7th try, and went on a 12 mile ride yesterday!

My Brompton folding bike, the second most expensive thing I own, has been out of action for, I believe, years. I bought it to have local transportation for my RV, and it worked amazingly well on my trips to Portland. The main problem was that the headlight, which is wired onto the bike, had broken off the mount. The headlight itself is super expensive, so having it banging around while riding was a non-starter. I had tried to fix it with various kind of glue and plastic welding at least six times, but it had broken off again every single time.

Yesterday I had an invite to bike around downtown Austin while the coronavirus has reduced local traffic in what was absolutely perfect weather. Determined to participate, I broke out Testers model cement, which I though might work since it actually melts the plastic a bit. It was a total failure, so I decide it was time to give up on how it looked and break out the Heavy Artillery. I mixed up some five-minute epoxy and put two layers on, rebuilding the entire stem and the reenforcing the join. Cautiously optimistic, I tried a test ride around the farm, and it held!

Next I had to get the bike on my scooter. I used some foam and a set of cargo nets to jankily strap it down on the passenger seat. I was super nervous it might fall off, but it was actually pretty firmly held. I also had pictures in my head of the newly-fixed headlight breaking off and bouncing around for the entire trip. But everything was fine, and I managed to make it just south of downtown on time.

We explored most of the 6th street and Congress areas as well as the Rainey district (where we got some tiny donuts) and parts of the riverwalk. I was worried I would be dying on hills since I'm in terrible cardio shape right now, but Ryan did a great job keeping us mostly level and I really wasn't even fatigued. The Brompton shook off its shifting issues after a bit of lube and riding and performed like it was brand new! I had almost decided not to go earlier because the shifters were misbehaving and I didn't have time for a tune up.

Now that it's working again, I'm refusing to put it back in storage. I found a temporary place for it in the van and am planning to make a mount there, and another one for easily attaching it to my scooter. There are many great places to ride around Austin, and now is a good time with better weather and very little traffic. However, to get it off the property I live on I have to walk it about 1/2 mile over a rock road that it can't handle very well. It's a ninja urban commuter, but not much of a mountain bike.

Here's the route. I didn't do the first three miles because I met up with Danielle and Ryan after they started. It's sweet that they have all these tracking tools now. 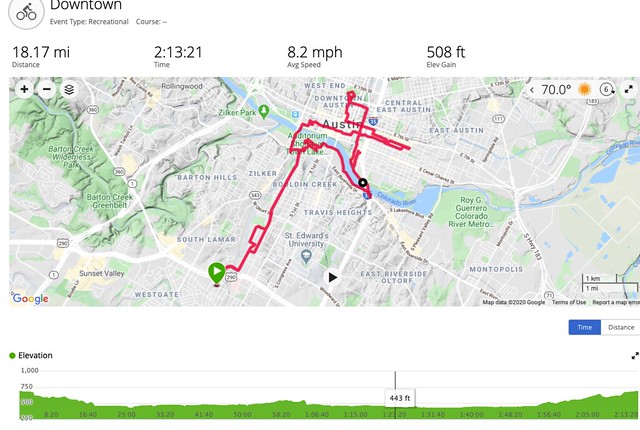 I really loved cycling when I was kid, bunny-hopping around our neighborhood on my Redline BMX. I’ve been a slug for months, but regular cycling will be a fun way to get back in shape. It feels great to be riding again!